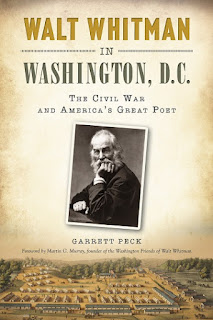 Many of us who live in Washington, D.C. or the surrounding area came from somewhere else.  Because of this, we all have stories of moving here.  They chronicle our arrival, finding jobs and places to live, and building lives for ourselves.

Every city has its own "immigrant" stories.  But D.C. is different in being a one-company town and the nation's capital.  Whatever our reasons for coming here, the presence of the federal government touches all of us.  It gives our histories a kind of common experience, whether you work for the government or not, because has been such a driving force in shaping the region.  Ask anyone about his or her arrival in D.C., and you're bound to find something of your own story in it.

And it's not just for our contemporaries.  Open any chapter of Walt Whitman in Washington, D.C.:  The Civil War and America's Great Poet by local historian Garrett Peck, and you'll feel the pull of familiarity.  Whitman came to D.C. in 1862 to find and care for his brother who had been wounded fighting in the Civil War.   He used his network of friends to find places to live and federal jobs that allowed him to pursue his writing as well as to begin a remarkable regimen of visiting wounded soldiers in D.C.'s many military hospitals.  He also met Peter Doyle, the love of his life, and probably would have stayed had he not had a stroke in 1873 that forced him to live with family in New Jersey.  [Full disclosure, Peck is a friend and customer of my wine business.]

That's just the bare bones of the story.  Add to it that Whitman had an enormous, larger-than-life personality, that he lived through and in the center of one the nation's most tumultuous times, that his poetry represents, for many, something quintessentially American, and that he wrote some of his most famous poems while living here.  The result is a fast-moving book that gives the reader a taste of a life well-lived and well-documented, too.

Peck packs a lot of interesting material into a small number of pages, from unhealthy conditions in Civil War hospitals to the challenges of everyday life in the 1860s.  And D.C. residents will find many details to relish:  overlays of Whitman's wanderings on current maps (he loved to take long walks in the city and beyond); President Lincoln's daily routines; restaurants and watering holes; horse-drawn streetcar routes and the like. Whitman's D.C.-based literary output is also examined.  But three things in particular stand out for me in Peck's account.

The first is Whitman's boundless energy and kindness.  After locating his brother and helping see to his care, Whitman began visiting hospitals serving wounded soldiers an average of three times a week for four years, when the war hospitals closed.  Unpaid, he spent an enormous amount of time talking with the soldiers, bringing them special things they requested (like ice cream) to help ease their pain.  He wrote letters for them, and comforted them in their loneliness and last moments.  It's hard for most of us to imagine how awful the conditions were in these hospitals.  Yet Whitman maintained a cheerful, almost fatherly demeanor in horrible circumstances.

Whitman claimed to have got far more out of it than what he gave in his hospital visits.  Certainly, he got some material for his voluminous Civil War journalism, and as a writer he no doubt absorbed stories and snippets of personality.  Whitman was already in his early 40s when he came to D.C., and didn't seem to have lived an altruistic life up until then.  Trying circumstances bring out the best in many.  But his simple and modest accounts of doing things that meant so much to so many wounded soldiers make it clear that he was a truly empathetic person.  It's a fitting tribute that half of the Whitman Walker Clinic name is for him.

The second is Whitman's romantic relationship with Peter Doyle.  Doyle was an Irish immigrant who fought for the Confederate army in the Civil War, left the army, and moved to D.C. to escape being re-drafted.  He was a nighttime horsecar conductor in D.C., and Whitman happened to take his car one night.  Whitman was the only passenger on the ride and it was the beginning of a long romance.  As Peck notes, it might seem that the two were intellectually mismatched, but they complemented one another.  After Whitman's death, Doyle recounted that they were "the biggest sort of friends," a lovely way of putting it, considering that most of the vocabulary around same-sex relationships at the time was far less benign.  In 10 pages, Peck gives us a history of their time together that seems timeless, despite the 19th-century setting.

Finally, I was struck by how Whitman acted as his own one-man P.R. machine.  What authors wouldn't relish the opportunity to write anonymous reviews of their work and get them published in reputable newspapers?  Whitman was clearly inspired by Abraham Lincoln and created some of his most famous poetry and prose works to honor the slain president.  But as Peck notes, "Whitman may or may not have attended Lincoln's [second] inaugural speech, and he certainly did not attend the inauguration ball.  In fact, he missed Lincoln's assassination and funeral as well.  He never even got to shake hands or speak with the man he adored.  But he immortalized Lincoln with his poetry."  I can't help thinking Whitman was also canny enough to realize that being a Lincoln chronicler could be a good career move.  There's nothing wrong with that if you can deliver the goods.  Whitman did, and then some.

Whitman left D.C. after having a stroke in 1873, and it was only after leaving that he gained financial security through his writing.  Peck's account of the poet's time here makes me wonder what he could have given us had he not had to go.  In the end, that's the mark of a good story.  Both Peck and Whitman leave us wanting more from our fellow immigrant to D.C.

Garrett Peck gives popular tours in and around Washington, D.C., including one that focuses on Walt Whitman's time in Washington.  Check it out at www.garrettpeck.com
Tom Natan at 4:44 PM
Share

Make sure you are a subscriber if entering a contest to be eligible to win a prize. We need to have a way to contact you to tell you if you win.